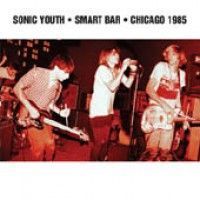 In the fall of 1985, Sonic Youth were touring the States following the release of their Bad Moon Rising LP. This show at Chicagos Smart Bar was recorded on 4-track cassette and consists of live versions of most of the songs from that album, early performances of "Secret Girl" and "Expressway to Yr Skull" (later to be released on Evol) and a rare, never-before-released live rendition of "Kat n Hat." Mixed and mastered by the band from the original tape source, includes liner notes by Gerard Cosloy and Sonic Youth engineer Aaron Mullan, plus unpublished photos by Pat Blashill and Steven Koress. "The ideal archival offering would meet a list of criteria: it should be an unreleased and sonically compelling recording of an amazing performance, which not only sheds some light on the known Sonic Youth catalog for the serious aficionado, but also captures the attention of the general fan. Its a pretty tall order, but I think this tape from Chicago 1985 fits the bill.. [I]ts the earliest live multitrack of a Sonic Youth show known to exist. "Having now listened to this tape maybe 100 times, I can say this: its a killer show. The material was mostly released on the studio album Bad Moon Rising. The album is brilliant, but the material is also so visceral and improvisatory that it greatly benefits from the additional perspective offered by a live recording. Kims vocals, more detached on the album, are fierce here. Sheets of feedback insanity on the album which I always assumed to be lucky studio accidents turn out to be actual parts that Lee and Thurston can re-create at will. The album was recorded with Bob Bert on drums, but this show was one of the first after Bob left and Steve took over. Bobs primal stomps doubtlessly propel the studio versions, but hearing these parts as interpreted by Steves systematic pummeling, illuminates the crucial transition to the Evol and Sister albums and beyond. We do get a taste of Evol too, with an early performance of Expressway To Yr Skull and the first known live performance of Secret Girl, plus an instrumental version of the rarely performed, and never released, Kat n Hat." Aaron Mullan 2012

Gates, Rebecca & The Consortium
The Float