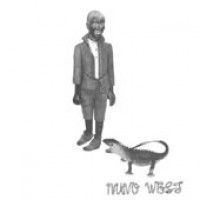 Hailing from the ashes of Phoenix legends of THE RED SQUARES, after their disbanding in the winter of 1983, Sonic Mike Stephens (lead vocals and guitar) and the other guitarist and keyboard player Roger Lee Chavous decided to start another band. They met bass player Walter Charchuck, and than started kicking around a crazy idea of combing Country with Synth/Punk material using a shitty drum machine. Greg David, the drummer, combined both drum machine and electronic drums. The plan was to dress like a new age cowboys, as all of them were from Arizona. Unlike some of the local Rock groups, NUVO WEST took a decidedly different approach to their style of playing. Art galleries like the Awun House, hosted [close] basement parties with the band that people were taking notice of. Opening for everyone from the Del Fuegos to buddies Rank N File, Nuvo worked their tails off. Enter buddy/studio wiz, Fred North. Using Sonic Mikes practice studio, Fred set up his TASCAM 4 track and recorded the now sought after "Scary" EP. Included on the record were original songs written by Fred with a very heavy western influence, aka "Apache" and originals written by Sonic and Wally. Debuting the EP at a trendy "Alternative" club in Scottsdale, the band combined fence post props with several TVs playing homemade videos, including violent car crashes and porn. The audience loved it. The EP sold well locally, and the boys went out to tour in a limited fashion. In 1984, the band recorded their biggest album to date, "Twankin", a word the band loved. Gone "were the keys/synth, and the look turned to jeans, large cowboy hats and nudie shirts. Released on cassette, "Twankin" out sold the previous EP twice over.