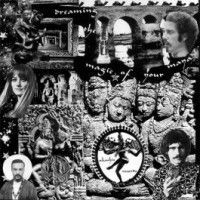 The Universal Mutant Repertory Company are most known as a group that included drummer Angus MacLise, multimedia avant-gardist who was the original drummer of the Velvet Underground. The Company were formed in the late 1960s, and included MacLise, his wife Hetty MacLise (on organ, tanpura, and probably other instruments), Loren Standlee (alto flute), Ziska Baum (Indian dulcimer), and Raja Samyana (guitar). The Universal Mutant Repertory Company was a name devised by filmmaker Ira Cohen, to describe the people appearing in his film Invasion of Thunderbolt Pagoda. All of the musicians did an improvised soundtrack to that film at St. Mark's Church in New York. A 39-minute tape of the performance, used as the title track, formed the core of the Angus MacLise retrospective CD collection The Invasion of Thunderbolt Pagoda. On this piece, the group played drone-trance music propelled by MacLise's charged hand drumming, given extra psychedelic coating by the employment of four microphones, each run through an echo chamber. Loren Standlee recalled in The Wire magazine that the musicians would play together for as long as eleven hours straight. An original copy would cost you a small fortune (raising over 4 digits!), but here's at last an accurate vinyl reissue that comes complete with liner notes plus an amazing poster of one of Loren Standlee's psychedelic collages plus an extra LP with previously unreleased studio material. Limited to 500 copies only.