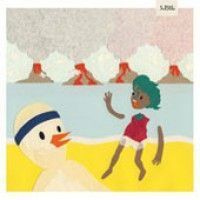 Y Niwl, the string-twanging, tremelo arm-waggling, beat-bashing guitar combo from the wilds of Wales, have started a surf-rock revolution. Despite its less than timely dead-of-winter appearance, the band's eponymous 2010 debut hit big with critics in thrall to its classic instrumental sound. It won fans in Gruff Rhys, who adopted them as his backing band and described them as "post-rockers gatecrashing a Tarantino soundtrack", and Richard Hawley, who took them on tour and described them as "the best surf band in Wales. They could actually be the only surf band in Wales". All that time on the road has paid dividends - not only has it made them a crack live unit, but they found inspiration to write a batch of six brilliant new tunes which they're now set to present: "4" is another serving of sweet, surfin', soul soup.. As much as Y Niwl recall the surf guitar greats Dick Dale, The Surfaris, The Champs, Joe Meek and The Shadows, their brilliant, modern reinvention of the form has led to a reappraisal of those original surf rockers.

Rippers
It's Not A Place For The Men