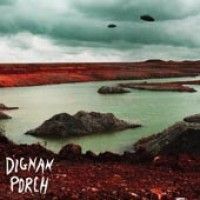 Dignan Porch
Nothing Bad Will Ever Happen
Capture Tracks | LP | 19 €

Nothing Bad Will Ever Happen" is DIGNAN PORCH's second album, though in many ways it's their first. 2010's debut, ,Tendrils", was written and recorded as a solo concern by singer Joe Walsh. Here, he's joined by the full band, comprising brother Sam Walsh plus close friends Ben Goodwin, Hayley Akins and Stephen Keane. Recorded at Homerton's Sound Savers studio with Henry Withers (Lovvers / Sharm El Shakes) Mark Jasper (Bastard Sword) and Alex Clegg (Breathe Out), The album was taped live on reel-to-reel tape with minimal overdubs. The resulting album is a thing of raw beauty, its melancholy melodies shining through the fuzz and filth, singers Joe and Hayley crushing you with emotion throughout.

Weird Owl
Ever The Silver Cord Be Loosed