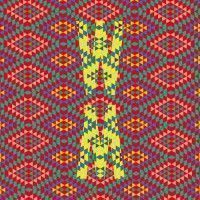 Repress!!For those who are unaware, Goat are a collective of musicians who hail from a small and very remote village called Korpolombolo in deepest darkest Sweden. Legend has it that for centuries, the inhabitants of the village of Korpolombolo were dedicated to the worship and practices of Voodoo. This strange and seemingly unlikely activity was apparently introduced into the area after a travelling witch doctor and a handful of her disciples were led to Korpolombolo by following a cipher hidden within their most sacred of ancient scriptures. The reason it led them there is unknown, but their Voodoo influence quickly took hold over the whole village and so they made it their home - there, they were able to practice their craft unnoticed and unbothered for several centuries. This was until their non-Christian ways were discovered by the Church and they were burned out by the crusaders, the survivors cursing the village over their shoulders as they fled. To this day, the now picturesque village of Korpolombolo is still haunted by this Voodoo curse; the power of the curse can be felt throughout the grooves of this Goat record. The nine track album follows the underground success of the now sought after 7" Goatman, which is also included in this selection. The band takes in many influences, from the Afro groove that is central to the album, through to head nodding psych, post-punk, turkish rock, kraut repetition and astral folk. The band are at present preparing a ritualistic live performance that will be gracing stages across Europe in October, including an appearance at the great Supersonic Festival.

Low Frecuency In Stereo, The
Futuro