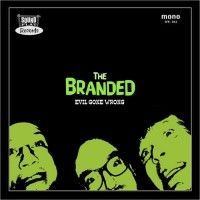 Here it comes, the third LP by your favourite Swedish Garagepunkers THE BRANDED - and as you could have guessed, this band will once again blow your minds with it! EVIL GONE WRONG is a mixture of punk, 60's R&B and stomping, wild garage. Just like its predecessors (released on DIRTY WATER RECORDS), you will instantly fall in love with this fantastic raw Garage-monster! Not least because it has been recorded with analogue equipment and vintage instruments only, to ensure an authentic garage sound. Catchy songs like 'Drive me outta my Mind' or 'Listen' will make you jump and shout in a second - you see, these 'Kettenfett'-drinking guys from Malmoe really know how to make rockin' music! Among eleven of their own compositions, the album also includes a brilliant cover of the 60's Garage classic 'Cry' by THE MALIBUS (,which was compiled on the famous BACK FROM THE GRAVE series). EVIL GONE WRONG is a record that demands to be played loud and it will give you the same feeling as THE BRANDED's staggering, energetic liveperformances. About the final song on this LP, the band states: 'it is an homage to the great work done by Lutz and Trax for promoting great rock'n'roll around the world, and about touring around Germany in an old Chevy van (the band's rusty tour van). 'Soundflat City Limits' is a 4 minute psychedelic-punk masterpiece! And if you're wondering what the line 'in Solingen they really go town / everybody take your trousers down' means, you'll have to ask Trax.' - With an homage like this, it was inevitable: this LP had to be released on Soundflat!

Bright, Gerry & The Stokers
Stand Up! This Is...