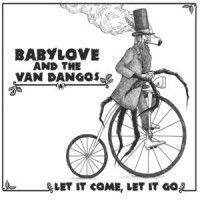 Babylove & The Van Dangos
Let It Come, Let It Go

Glengali, self-proclaimed baron of shabby sailor's dives and demigod of cock-and-bull storys, is not only protagonist of the album's opening song but moreover the fictional point of reference of every single song on Babylove & The Van Dangos new record entitled "Let It Come, Let It Go". Pursuing that particular agenda in terms of storytelling, danish Babylove's new songs introduce a vast variety of characters and delivers an insight into the parallel existence of bathhouse, basement parties getting out of hand and the solitude of remote country roads. Who can tell where the lyrics might deviate from the truth and fiction begins and even singer and songwriter Daniel Broman remains silent. At least the fact that Babylove & The Van Dangos adopted a tiger bengal tiger is true. Whether the tiger really resides in Babylove's rehearsal room would again not be answered by Broman: "A story, a story, let it come, let it go..." In the last eight years, Babylove & The Van Dangos were constantly touring and recording and became an outstanding act in the European Ska- and Reggae scene. Thus, "Babylove" turned into a seal of approval when it comes to soulful off-beat sounds with distinctive Jamaican roots. At the same time, Babylove & The Van Dangos' records constantly overstep the stilitistic limits imposed by their genre and would ever break with musical puritanism. In fact, their forth album refines their very own retro style, musically as well as the recording with vintage equipment is concerned. Already before its offical release and the following tour in May, "Let It Come, Let It Go" turns out some kind of globetrotter. The album was recorded and produced on Danish island Amanger, mixed by Craig "Dubfader" Welsh (who is among others also responsible for The Aggrolites' "Rugged Road") in Boston and mastered at the legendary Abbey Road studios. In the end, its bizarre artwork was designed by the Danish artist John Kenn Mortensen, who did a good job in picking up the record's tall tale's essence and realizing it graphically. Including every aspect from songwirting, lyrics and artwork the album will convince with a very highly elaborated overall concept.

Wright, Winston
The Liquidator Strikes Back