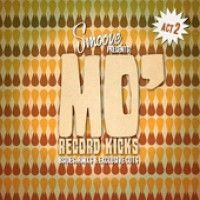 MO' RECORD KICKS is back! And Act II is an even heavier collection of RK exclusives, b-sides, remixes and material that appears on CD and compilation for the very first time. The man behind this fine selection of RK sounds needs no introduction, DJ/Producer SMOOVE has been an avid collector of all that is funk for more than 30 years and is one half of the renown duo Smoove & Turrell. He has releases out on Acid Jazz, Jalapeno and Unique to name a few, as well as having founded the labels Wack Records and Wass Records. Not only did Smoove lovingly hand-pick each cut that appears on MO' RK II, but he is also responsible for 2 of the first-rate remixes that appear here: THE NEW MASTERSOUNDS and NICK PRIDE & THE PIMPTONES both get a Smoove reworking, while brand new afro-funk combo from Sydney THE LIBERATORS are remixed by KOKOLO head honcho Ray Lugo, THE DIPLOMATS OF SOLID SOUND are given the Lack Of Afro treatment, RAY HARRIS & THE FUSION EXPERIENCE get a makeover by Valique and "Are You Ready" by MR. COMICSTORE feat. NICOLE WILLIS appears in a new discomix version. Other highlights of the compilation include a cracking gospel funk piece by WILLIAM JOSEPH FOWLER & THE DISCIPLES, some deep funk by recent RK signing HANNAH WILLIAMS & THE TASTEMAKERS, and brand new material by Big Boss Man's bass player Scott Milsom aka THE HAWK. Plus singles by THE BAKER BROTHERS, LINK QUARTET, FLOYD LAWSON, CRABS CORPORATION and more!