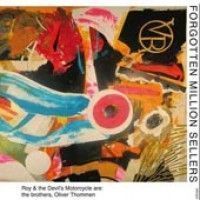 LP: Jacked heavy Paper, Printet innersleeve, Black Vinyl and incl a FREE CD !!! SUPER KILLER PSYCHEDELIC BLUES PUNK FROM THE EARLY SWISS TEENAGE MOUNTAIN BROTHERS . 1st VOODOO RHYTHM RECORD RELEASED IN 1997, WAY BACK IT WAS TOO EARLY... TODAY A LEGENDARY PLUES PUNK MONSTER ALBUM. 20 YEARS OF VOODOO RHYTHM RECORDS, it's time to RE-RELEASE our first album back from 1997. After RECORD JUNKIE stopped producing music, Voodoo Rhythm Records was born and released the very first Roy and The Devils Motorcycle album as his first release on the label. The cover artwork was a special screen print, hand cutted and folded, but back then the album was definitely 10 YEARS TOO EARLY, TOO MUCH BLUES and way TO MUCH PUNK and PSYCHADELIC.. you have to notice this was in the peak time of TECHNO/TRANCE MUSIC. Today this album fits much more.. it's 2012 and nowbody knows where to go and what to do and how to do it...it's old time- and new time -ALL AT THE SAME TIME and this album gives you an answer on all levels . It's an album full of teenage power forced by PUNK POWER from the MID 70'S and it flies over your head like the sounds of the 1969 BRITISH PSYCHEDELIC AREA... It is so RAW and TRASHY that people back then sent it back to me, complaining about the sound qualitee an their WEIRDNESS..... hahaha... over the years this album turned into a CULT OBJECT and COLLECTORS item. Nerds, music fans all over the world didnt stop asking about it, it was a curiosity... until today !!! Recorded by the band itself, at the Roy Home Studios on real tape to tape, to another tape and to another tape, than true a telephone and to another tape, then blasting everything up .. that's what made the bands music famous worldwide... these amazing recordings, stuff you can't do with a computer today, truly handmade, music from the beginning to the end, so please welcome one of the MOST AMAZING ALBUM EVER RECORDED and produced IN SWITZERLAND .