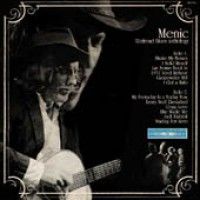 MENIC DIGS A RIVER BETWEEN BOSTON, MASSACHUSETTS AND BERN. SWITZERLAND SAILS ON IT AND TELLS YOU STORYS ABOUT HIS CHILDHOOD AND THE DARK BLACK SIDE OF HIS HEART, A MODERN TRAVELING TROUBADOUR SINGER OF ITS TIME. MENIC grew up near BOSTON, MASSACHUSETTES and now lives in Switzerland. He is well known as singer, songwriter, guitarist and fiddle player of the "kick ass-blue grass" combo ZENO TORNADO & the Boney Google Brothers from BERN, SWITZERLAND. He played as a STREET MUSICIAN and in countless clubs around Switzerland, now finally the time has come to release his very first debut album on Voodoo Rhythm Records. RAILROAD BLUES ANTHOLOGY offers 12 original songs from a wide palette of moods and styles, played on acoustic instruments like guitar, banjo, mandolin, accordeon, double bass, violin and slide guitar. Menic's music is rooted in the musical traditions around the NORTHERN ATLANTIC and the DEEP BLUES, which you find up and down the Mississippi... he always performed and worked with many bands, friends and artists of various musical genres, like PUNK, CAJUN, STONER ROCK, IRISH FOLK and BLUEGRASS, e.g. ZENO TORNADO, THE DEAD BROTHERS, MAMA ROSIN, DELANEY DAVIDSON, THE TIGHT FINKS etc. All these influences shine through on this first full-length album wehre he invited also guest musicians like Magot and Satch from Zeno Tornado and the Bony Google Brothers, CHESSY WEAVER (PHON ROLL, ZST) on vocals, RESLI BURRI from Dead Brothers on Hammond, and Cyril Yeterian from MAMA ROSIN on accordion. He recorded at STAR TRACK STUDIOS with GUZ (Aeronauten) and Caliber Studios by ADI FLmastering did ERIC MERZ . MENIC, a MODERN TROUBADOUR SINGER , only him and his guitar is already enough on stage. His songs put you into places that you've never been, but feel you've always known. He turns his story into fiction so you might remember your own, and shows the dark side of his heart so you might find some peace. He lets you forget your every day if it looks too bleak, and makes you feel at home, right there where you are, in front of the stage or at the bar.