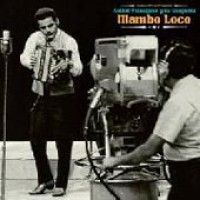 Having built its reputation on releasing long-forgotten gems from 70s Africa, especially Benin (including two releases by Orchestre Poly-Rythmo de Cotonou), Analog Africa is moving its focus to another continent altogether for release number 7: "Mambo Loco" is a compilation of tracks by Anibal Velasquez, the legendary accordionist from Barranquilla in Colombia. In fact, when not crate-digging in Africa, Analog Africa founder Samy Ben Redjeb can often be found in Colombia. In the summer of 1952 Anibal Velasquez walked into the studios of Discos Atlantic for his first recording session. What nobody knew at the time was that this 16-year-old accordionist was about to become a living legend of tropical music by creatign a crazy blend of Guaracha, Pompo, Guarija, Cumbia and fast African beats - the perfect stuff for the annual carnival of his hometown Barranquilla. Velasquez' eclectic mix would ultimately make him one of Colombia's most innovative and productive musicians, adored in Venezuela, Mexico and beyond. The tracks selected here have become powerful tools during Analog Africa DJ sets. Use them with caution! 24pages Booklet. + 2 Videoclips