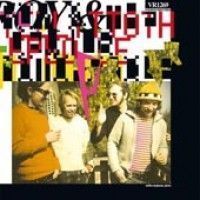 Jacked heavy Paper, Printet innersleeve, Black Vinyl and incl a FREE CD !!! MESSED UP SUPER RAW PSYCHEDELIC ROCK'N'ROLL FROM TREE ALPINE SWISS VOODOO BROTHERS ,TRIPPIN' IN A RIVER OF ENDLESS BLUES PUNK AND PSYCHEDELIC POWER SOUNDS . Voodoo Rhythm Records is proud to announce their THIRD LONG AWAITED ALBUM,. ,tell it to the people' Since 1991 Roy and the DMC have been getting lost in music. Saturated in BLUES, GARAGE and PSYCHEDELIA, they've honed a focused, raw and HYPNOTIC sound ranging from blissed out blues to raging garage and DRUGGY SOUNDSCAPES. Always moving at their own pace and with a slightly disturbing warpedness. It's worth mentioning that the THREE guitarist BROTHERS grew up in a TINY SWISS MOUNTAIN VILLAGE. When they moved to a larger town with a 'rock club' where they first saw SPACEMEN 3 and some other sonic pioneers of the time, they got immersed in the energy of garage punk, primal ROCK AND ROLL, and later on, THE DEPTH OF BLUES. After releasing several singles, compilations and EPs, their first full-length album, FORGOTTEN MILLIONSELLERS, came out in 1998 as one of the first releases on VOODOO RHYTHM RECORDS The second album, BECAUSE OF WOMAN, followed in 2006, and definitely catapulted them countrywide into the status of a influential band and showed that their cult continues growing with every record they put out. Everything the band records and produces, is done at their own self-made analogue studio called 'ROY HOME PRODUCTION'. Maybe it is because good things take time and they take it. Maybe it is because of their amazing artwork for covers and posters. Or maybe it's just because they don't give a fuck about what anyone else is doing musically that they are truly an original. Their new drummer, ALAIN PERRET-GENTIL (the singer of the garage punk band COME'N'GO), plays harmonica, sings backing vocals and has introduced a more dancier, groovier element to some of their new songs. TELL IT TO THE PEOPLE is all Roy Home Recordings, self made to the Bone, hours of recording on Tape and over recording re recording trowing away and recording some more.. a Patchwork of music They supported bands as Acid Mother Tempel, SONIC BOOM, Reverend Beat-man or Martin Rev from SUICIDE

Harla Horror
A Nightmare Of Horror!