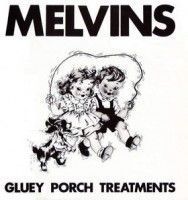 Melvins' full-length debut, if it could even be called full-length, isn't a whole lot different from the 6/10/24/whatever songs EP released previously. I don't mean that in a bad way, it's still really good, and it is better than that EP, with a lot of cleaned up production and a little more substance The real appeal of these early Melvins releases lies in the sheer anger, raw fury & brutality on show, and from the very beginning, with the dark, foreboding, pissed off punch-in-the-face that is "Eye Flys" you know what you're in for. The whole album is an assault on the senses, a dervish of noise and dissonance, with the angry riffs and constipated vocals. There's little else like it, aart from the legions of stoner rock, grunge and noise bands that pay tribute to these early formative works. If there is one issue I have with this early stuff, it's that it's still a little too fragmentary to be truly great. As with the previous EP, it feels like the Melvins have written 5 full-length songs, shattered them into pieces and put them back together in random order. It can make for hard listening, but iit's worth the effort to experience pure, uncut fuzzy brutality of this level. Great stuff.

Melvins
The Maggot & The Bootlicker (2lp)