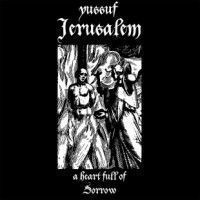 A dillusioned album for broken hearts, A heart full of sorrow is the work of Benjamin Daures, 24 years old, heir against his will of a tradition of loner, which from Ian Curtis, through Morissey, to Kurt Cobain, played everything they had on a record. Made in his surburbian bedroom while smoking joints, A heart full of sorrow is a first album, dreaming of other places as a way to escape the local boredom, the gloominess of Paris' outskirts. Draft ballads, thrown on a 8 track like break up letters to these stalling teenage years. Benjamin here plays all the instruments : A skullish drum machine, a shy guitare, and uncomfident vocals... While listening attentively, you understand that the fragileness is the force here, that's his style is forged in his akwardness that never sound like a pose. We're talking about sincerity, nakedness, a striking will of not hiding behind the primitive energy of Garage-Rock, to put back songwriting into angrily-played songs. Think here of missed Jay Reatard. We also know that Benjamin Daures is the leader of The CRETEENS, punk band who's had numerous 7" out on american labels, and that after two months of tour in the USA to support A heart full of sorrow (released there on Floridas dying) the past year, Yussuf Jerusalem almost imploded. But to learn more about Benjamin Daures, no need to go further, just listen to A heart full of sorrow and instantly become a follower of Yussuf Jerusalem

Eve
The Warrior/it Don't Matter To Me