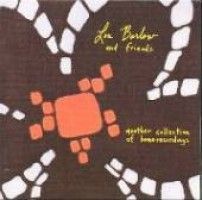 For a time in the 1990s, it seemed as if one could measure the passage of time by the frequency of Lou Barlow-affiliated releases--surely only a few months had passed if a new solo, Sebadoh, or Folk Implosion record was out. ANOTHER COLLECTION ... Full DescriptionOF HOME RECORDINGS is a seemingly hodgepodge cobbling of songs that Barlow recorded either by himself or with the aid of various friends (Sebadoh's Bob Fay, Lou's sister Abby) in the first half of the 0s. They've been recorded in glorious lo-fi, and mostly on his Portastudio that followed him wherever he went. The set contains the requisite silly filler ("Puffin'"), but also offers ephemeral glimpses of beautiful songwriting ("Blonde in the Bleachers"), and ultimately makes a more cohesive album than one might expect given its tossed-off feel. A highlight is an endearing cover of Bryan Adams's "Run to You"--its looseness and playfulness are indicative of a collection that doesn't take itself too seriously, while remaining a legitimate and, some might argue, milestone release.

Hooper, Brian Henry
I Won't Be Bend For You