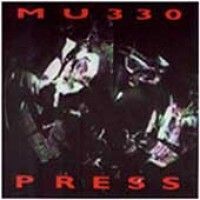 Formed by a trio of school friends in 1988, by the early '90s, MU330 had evolved into a tight six-piece unit that was impressing third wave fans ever further afield from their St. Louis home. In 1993, the group self-released their debut album ... Full DescriptionPress, which was picked up by the Asian Man label the following year. This set certainly has its charms, and captures the exuberance of their stage shows for posterity disc. The album kicks off strong with "Hoosier Love," one of the highlights of their live shows, and a jubilant celebration of Midwestern romance. With its scorching blend of kicking rock, skanking ska, and infectious pop, it was guaranteed to send any but the most hostile crowds into a frenzy, and has the same effect here. "Bagelbird" is just as exhilarating, albeit in a very different style. Here, boy meets girl as revved up early rock & roll falls for third wave ska. "Stuff," which eschews romance for sex, is even brighter and bouncier, pumped up by a new-school punk sound and plenty of flashy brass. "Fleeba," in contrast, is old-school, its lustrous melody reminiscent of the Beatles circa the mid-'60s, but buffed up with tight blasts of brass. What really wowed the club crowds, however, was the group's versatility, which spins from the hard rock headbanging throb that spills across the title track, across the funk and metal with which they pay tribute to "Captain" America, and into the taut military tattoo that opens "Safety Boots," which then transforms into a Two-Tone-styled instrumental, but is thoroughly modernized via rapped vocals. An extremely impressive debut, and while there's still a bit of room for growth, this highly entertaining album is a fabulous introduction to a band that was undeniably on their way up.