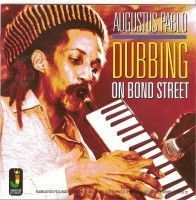 *Augustus Pablo has his place set in Reggaes story, his unique sound stemmed from the use of a simple musical instrument the melodica,(see cover picture) that somehow in his hands,became majestic and mystic at the same time. Augustus Pablo (b.Horace Swaby,1954,St Andrew,Jamaica) cut his musical teeth with producer Herman Chin - Lo in 1969,with his first record Iggy Iggy.His second cut for the producer was to be the timeless East of the River Nile that carried that haunting Far-East feel that in many ways became his signature sound.Pablo has worked with many of Jamaicas top producers adding his flavour not only with his melodica but also with his keyboards and piano skills. He has added his magic touch to many of the classic Studio One rhythms,Skanking Easy (Swing Easy rhythm), Frozen Dub (Frozen Soul rhythm) to name but two,and his classic set of dubs that he reworked from his own tunes and productions for artists such as Jacob Miller became his renowned dub set King Tubby Meets Rockers Uptown. Working with the master himself Mr King Tubby at his studio in Drummlie Avenue,Kingston. We have sourced a collection of original rhythms that were cut at Duke Reids Treasure Isle studio that Mr Pablo worked over in his now familiar style. Again adding his magical sound over these cuts to produce what we believe to be another classic set..Hope you enjoy the ride..