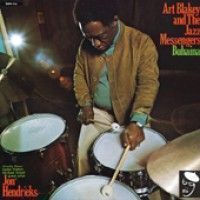 An amazing album that has Art Blakey completely reinventing himself for the 70s! Blakey shifts from straight hardbop to kind of a modal soul jazz groove, touched with some of the electric playing of the younger jazz generation, but not enough to qualify as fusion or funk. Instead, he's working with some great younger players - like Carter Jefferson, Woody Shaw, and Michael Howell - hitting a groove that reminds us of some of the best underground soul jazz on labels like Muse or Strata East. Includes the amazing long groovers "Mission Eternal" and "Chant For Bu", a famous Tribe Called Quest sample - plus new electric piano versions of "Moanin" and "Along Came Betty", both of which feature vocals by Jon Hendricks. (Cover has ring & edge wear, pieces of colored tape on the spine, and stickers on back.)