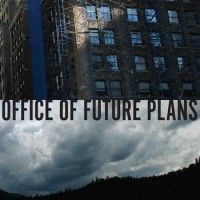 Office of Future Plans was never supposed to be a band. This band was hoodwinked into forming when Chicago punk luminaries The Bomb invited J. Robbins to open their Baltimore show in Fall 2009. Cellist/guitarist Gordon Withers (Bells, The Pauses, and known to many as the "Jawbox-on-cello guy"), bassist/multi-insturmentalist Brooks Harlan (Avec and War on Women), and uber-drummer and long-time collaborator Darren Zentek (ex-Kerosene 454, Oswego, Channels) were all enlisted for what was supposed to be a one-time, just-for-fun gig. It turned out to be a little too much fun to just do once. So, the band just kept writing and arranging, rehearsing at Robbins' Baltimore recording studio The Magpie Cage, and committing songs to tape as they came to fruition, with the creative process becoming ever-more collaborative and multi-dimensional.The band name is a nod to Terry Gilliam's Orwellian black comedy Brazil, and the more recent political dark comedy In The Loop, and to their real-life equivalents (Dick Cheney's Office of Special Plans, the government committee whose brief was to provide justification for the invasion of Iraq and other Imperial misadventures). The theory being: the blandest and most bureaucratic designations hide the most profound evil. In this sense, if only in nomenclature, OFP are kind of a Bizarro metal band for the new century.