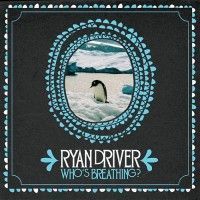 With his new album Who's Breathing?, Ryan showcases some of his new songs which, not unlike the drink that's named after him, are both eclectic and sweetly intoxicating. The first half is a top-heavy, bleary-eyed amble through the metaphysical country moves made familiar through his work in The Silt. Central to these songs is Ryan's heady, almost surrealist lyrics, which traipse commonplace folk themes on the slant and uneven ground of a funhouse. The second half assumes the mentalist lounge approach, that particular sound not unfamiliar to those who attend the monthly Ryan Driver Quartet appearances at the Tranzac bar in Toronto. Mr. Driver's own brand of smoky, downcast jazz meanders in a slack void between half-speed piano bar exercises and subterranean psychedelia cast in twilight. On piano, Ryan is accompanied primarily by bass, drums, and Martin Arnold's peculiar, intuitive guitar playing. But, as with the first half, it is Ryan's song writing that takes centre stage; teeming with double-meanings and verbal loopholes, excavating the alien and quietly phosphorescent landscape of the soul.

Vulgar Boatmen
You And Your Sister