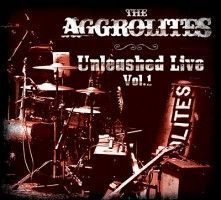 After eight years of touring the globe, Los Angeles-based band, The Aggrolites are proud to reveal their first live album, Unleashed Live Vol. 1. With five previous studio releases under their belt the next logical move for the band was a compilation of their favorite songs recorded live from recent shows at The Belly Up in Solana Beach, CA and The Roxy Theatre in Los Angeles, CA. Unleashed Live Vol. 1 features songs from all four previous studio releases plus a version of The Beatles "Don't Let Me Down" and "Banana" by the legendary reggae artist, Roy Ellis. "Fresh" off the entire 44-date Vans Warped Tour and a USA Album Release Fall Tour, The Aggrolites are yet again headlining a tour around Europe, this time in support of their live release (see Europe tour dates below). The band will start in Luxembourg on November 3rd making stops in: United Kingdom, France, Netherlands, Belgium, Switzerland, Italy and Germany. The Aggrolites are more than a band; they are a movement unto themselves carrying a banner created with their own hands. This banner reads "Dirty Reggae" and represents their signature fusion of reggae, soul, grit and determination. For eight years this bunch has rolled from city to city, across the pond and up main street USA. They rally the kids, the parents, the students, the cops, the bosses and the drifters.