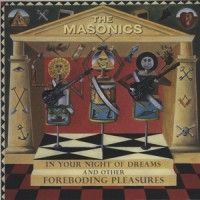 Masonics
In Your Night Of Dreams

Something of a garage-rocknroll supergroup - featuring musicians who have done time in such legendary groups as the Milkshakes, Pop Rivets, Wildebeests, Kaisers, Headcoats, Del Monas, and more Masters of the Medway beat made famous by Mr Billy Childish, this is the group that should be the more famous one - with their better songs and better musicianship. Bruce played alongside Childish in the Pop Rivets back in the late 1970s and he and Mickey were both in the Milkshakes (in fact, it was actually Mickey & the Milkshakes originally!). Anyone who has even a passing interest in garage and beat music of the last 25 years will have come across the names of the bands in which the three members of the devilishly stylish Masonics have spent time. And, combining their previous bands sixties beat, US garage and instrumental stylings with a punk rock attitude, this is a group that pays attention to detail, with a talent for songwriting coming to the fore. Singer/guitarist Micky Hampshire possesses a merciless instinct for touch ing, simple, timeless rocknroll melodies and lyrics. The band performs with verve and precision, on record and on stage, always giving their followers their moneys worth. Eight albums down the line The Masonics remain more hard-hitting and vital than any group of teenage hopefuls on the scene - of that theres no doubt.

Reverend Beat-man & The Un-believers
Get On Your Knees

Muck And The Mires
Hypnotic