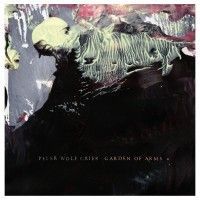 It is not so much a sound as a spirit. You don't need to name it to know it or to trust it. Peter Wolf Crier's second album Garden of Arms is a document that paints a vivid portrait of all the pain and beauty of growth. Written with the at-home repose demanded by performing a hundred shows in six months, these eleven tracks were nurtured from their hushed origins with a new-found footing of confidence and experimentation. Adapting the tenets of the grinding live show, the duo of Peter Pisano and BrianMoen transformed the fuzzy distortion, rolling and crashing drums, and laser-focused purposefulness into an intensely dynamic yet supremely polished album. The lead off track, "Right Away," best exemplifies the band's new direction, a dense and jarring embrace of the immediacy of real personal connection. Later on in the album, restraint is more readily apparent, in tracks like "Settling it Off," where the sonics do not threaten to overwhelm but are instead peeled back to reveal a more subdued, secure sense of direction. The notion that any one of these songs could be your favorite depending on where your head and heart reside, moment to moment, is the most appealing aspect of this album. Throughout Garden of Arms, swagger is juxtaposed against an icy delicacy, making the scope of the record complex but somehow an easily digestible statement of how Peter Wolf Crier are rolling: a wheel, rusted with unrestrained hope.

Gunman & The Holy Ghost
Thing To Regret Or Forget