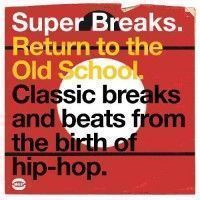 A damn classic entry in the Super Breaks series from BGP - one that's filled with crucial sample cuts from the old school - some really wonderful funky nuggets, brought together here as a great reminder of the tracks that first got us digging back in the day! There's less of the totally obscure numbers here than you might find on other Super Breaks volumes, but things aren't totally mainstream either - and the compilers have not only done a great job of pulling together tracks that were really important for hip hop, but have also managed to put a really fresh spin on the music altogether - reminding us once again that even in the age of digital music, nothing beats a well-done compilation! Titles include "Shifting Gears" by Johnny Hammond, "Mary Mary" by The Monkees, "Scratchin" by Magic Disco Machine, "It's Just Begun" by Jimmy Castor, "Africano" by Earth Wind & Fire, "Apache" by Incredible Bongo Band, "Got To Get A Knutt" by New Birth, "Get Up & Dance" by Freedom, "Super Sporm" by Captain Sky, "Who Is He & What Is He To You" by Creative Source, "Funky President" by James Brown, "Blow Your Head" by The JBs, "Johnny The Fox" by Thin Lizzy, "Let A Woman Be A Woman Let A Man Be A Man" by Dyke & The Blazers, "The Clapping Song" by Shirley Ellis, and "Get Ya Some" by Melvin Sparks

Excitements, The
*wait A Minute