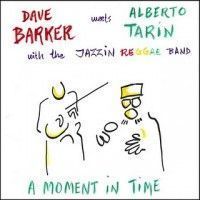 Dave Barker, Alberto Tarin and The Jazzin'Reggae Band show in "A Moment In Time" all of their potential. The legendary Jamaican singer and the Spanish guitar virtuoso along with a bunch of guests like the ones of Earl Appleton and Sergio Monleon go over a collection of committed originals and jazz standard in an intense and contagious way. Jazz, soul and reggae melt in a well defined stylistic line but offering a wide diversity of riddims counting with the soulful voice of Dave Barker on top. Dave Barker needs little introduction but just in case here go a few lines. Born in Jamaica, as a teen he was already member of various vocal groups including the first The Two Tones. In the late 60's he teamed up with Glen Brown recording for Harry J and Coxsone and he was a member of The Techniques for a brief period of time. In 1969 he recorded with Lee Perry classics like Prisoner of Love and Set Me Free. Although Barker had an outstanding voice Perry insisted in developing his potential as DJ. And it was in fact one of his DJ screams what Winston Riley used with veteran organist Ansel Collins to create the smash hit Double Barrel (top of the pops in UK in 1971 and top 20 in the USA). Duo Dave & Ansel Collins released a new hit single, Monkey Spanner and an album that remains a classic: Double Barrel and the Heavy Heavy Monsters Sound of Dave & Ansel Collins. The duo toured UK intensely and Barker decided to settle down in London. Since then he continues to record as a solo artist and with friends, like Bruce Ruffin in soul outfit The Chain Reaction or with 2-tone revivalists The Selecter. Alberto Tarin neither needs introduction. He has published three albums with Brixton Records along with his band The Jazzin' Reggae Band and since 2005 is the official guitar player of The New York Ska-Jazz Ensemble.  His works as session musician, guest guitar player, composer and producer are countless.

Ital Horns
Remains Of The Day