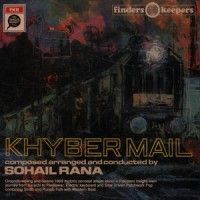 "Sohail Rana, versatile maestro of film and pop composition, and leading force in pioneering the cultural landscape of modern Pakistan. His longplay masterpiece, Khyber Mail is stocked with groovy eastern moods, electric organ, sitar soul and surf guitar." Alan Bishop (Sublime Frequencies / Sun City Girls)Khyber Mail is a concept album designed to invoke images and sounds of a high speed Pakistani freight train travelling from Karachi to Peshawar, was dominated by Sohail's whining and addictive electric keyboard and a motoric rhythm section of beaty percussion and sitars introducing a form of radical patchwork pop and mechanical music to a warm receptive audience.By combining the folk music of the Sindh and the Punjab with maverick sounds, signatures and rhythms, Khyber Mail marks a landmark shift in the Pakistani pop industry kick-starting a lengthy career for one of its best loved musical patrons while setting a challenging new standard for the "plugged-in" Lollywood pop scene that would explode at the turn of the decade. All aboard and full steam ahead for the Khyber Mail Twist.The newest instalment in our critically acclaimed Sound Of Wonder series, 2011 will also see the release our Life Is Dance - our second compilation of plugged in Pakistani popOriginal vinyl copies command prices in excess of 300 on certain internet auction sites - if youre lucky enough to come across one