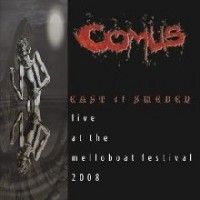 The seminal British progressive rock/folk band Comus are back! Their classic debut album, First Utterance, release in 1971, is on just about anybody who's anybody's list of "Desert Island" records. East of Sweden" is a live CD recorded at the Melloboat Festival in 2008, which was the first time the band had played live in 34 years. They were met with a tumultuous reception and this fantastic CD is a great document from that show. It is also the first release on the Dirter subsidiary imprint "Gnostic Dirt", launched by Steve Pittis and David Tibet.