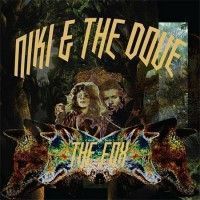 NIKI AND THE DOVE is a band from Stockholm, Sweden with two members, Malin Dahlström and Gustaf Karlöf. Their songs are full of magic and light but with an unsettling darkness hidden beneath the surface. It's pop music but a world away from the production line aesthetics of much modern chart music. Since getting together in February 2010, Malin and Gustaf have been busy writing together, figuring out just how pop music works and then discovering new ways to break it. Their first single "DJ, Ease My Mind"/"Under the Bridges" released on leading UK independent label Moshi Moshi, was one of the most striking debuts of the year, catching the attention of everyone from Artrocker and NME through to The Sunday Times, who declared the single could "be the two greatest alt-pop songs of 2010." Newly signed to the Sub Pop label this 12" single for "The Fox" is NIKI AND THE DOVE's first release on Sub Pop.