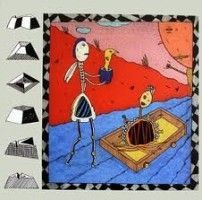 Maybe its something in the raw cows milk one can so fortuitously procure here in Western Massachusetts, or maybe its that lysergic haze of Berkshire foothill emanation, but whatever it may be, it is most definitely in manifestation as the five-headed rock n noise n bleet n zzrrp n roll n weirdcore phenomenon known only as FAT WORM OF ERROR. After more than six years of live gig decimation and confusion and a smattering of cassettes, cdrs, "legit" LP releases (on labels as swank as LOAD and Ultra Eczema), FWOE has become, along with Noise Nomads and Dinosaur Jr, as one of the most astounding musical whatsis factors in the Pioneer Valley. It was after being stunned into melted delight one evening at our local hang (the Flywheel natch) by the dead battery guitar, silent psycho-killer bass, drums punked beyond the free thump joy of John Stevens n Drumbo, and the supremely swinging costume-cuhraziness of the FREEKwency singer.well, we wanted to do a, ahem, "proper" LP. Put this genius fringe into the studio with Justin Pizzoferrato (thats right, the guy who helps engineer J Mascis and T Moore sides) and capture the delirious magic of FWOE in their inimitable prime. And we did! And Mark Beyer did the cover art! And the drummers name is Neel Young! And this LP rules HARD, and if you happened to be in the same room as the live FWOE this last summer than you know: Fat Worm of Error has got the coolest moustache in town. Case closed.

Sneaks
It's A Myth