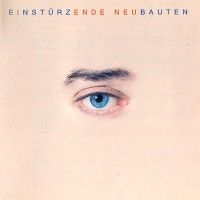 On their 1996 release Ende Neu (ending-new), the quintessential scientists of the post-avant-garde abstain from focusing on listener disintegration tactics as they did on prior albums, but opt instead to hone their craftsmanship in new compositional areas. Some followers of their earlier material might object to the obvious and comparatively conventional song structure and style that is displayed on Ende Neu -- picking up a power tool to highlight a piece rather than centering the entire work around it, or leaving a stage before setting it ablaze -- but the destruction has already been performed, and now they are erecting the brave new anti-building of musical art. Exploring intricate processions of time and toying with melodious harmonies, Blixa Bargeld and Co. seem to have matured gracefully. The opening cut, "Was ist ist," is a furious, fast-paced slander on the constant wanting of mankind while simultaneously serving as a tongue-in-cheek remark on how absolute, scientific power overrules impossibility. From there, Ende Neu continues to musically rewrite the band's style, using familiar topics such as ethereal chaos ("Die Explosion Im Festspielhaus"), cosmic complacency ("The Garden"), revolt ("Installation No.1"), and even a Kafka-esque piece, "Der Schacht Von Babel." This is the first release since the departure of founding band member Mark Chung, and it is obvious that the remaining members have taken the time to contribute to the void left by his departure. Ende Neu delivers a precision-fed matrix of audio-encrypted knowledge in a manner not like the chaotic Neubauten of the early '80s, but more strategic, and more mature.