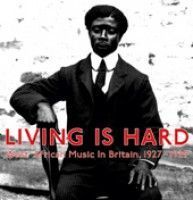 In 1924-5, the British Empire Exhibition was staged at Wembley. Spaced across three acres inside a model of the walled city of Zaria in northern Nigeria, the pavilions of Sierra Leone, Ghana and Nigeria displayed the arts, crafts, music and industries of each colony, for the edification and amusement of up to nineteen million visitors. Sir Robert Baden-Powell was so taken with the Ashanti talking drumming of Kwaku Prempeh that he suggested it should be studied by his boy scouts. Ladipo Solanke - on the other hand - abhorred the voyeurism and exoticism of the Exhibition. This was the year he took a break from founding the West African Students Union - a forum for anti-racism and anti-colonialism - to record a series of discs of Yoruba folklore for Zonophone, in line with his political ideas about a new West African state, melded by its cultural traditions. From the 1928-9 sessions - when Solanke was settling into the Union's new London headquarters, provided by Marcus Garvey - Ben Simmons' three recordings here offer a kind of entrenchment of this African nationalism, deep inside Fanti culture. His untitled track is uncompromising possession music - it is hardly surprising that Zonophone declined to release it - and the steadfast political vision of Obu Kofi is beautiful and startling. Altogether, these Zonophone recordings are a disruptive late entry into the history of black music in Britain. There is nothing whitened or sentimental about them, beseeching of pity, like minstrelsy and spirituals. It is comical to imagine Ben Simmons before the King - or championed by Edward Elgar and Arthur Sullivan, or invited to the White House, like Samuel Coleridge-Taylor. These records are unhitched from the protocols of a white listenership. You can hear Caribbean influences in the music of the West African Quintet, and the promise of highlife in Harry Quashie, but - setting aside a handful of guitar-based songs - the performances here disavow fusion. This is folk, not popular music, living by word-of-mouth, better suited to small, community-based gatherings than concert halls - resilient, elemental roots music from the West African underground of 1920s Britain, encrypted with messages home about life here.

Various
For Dancers Only