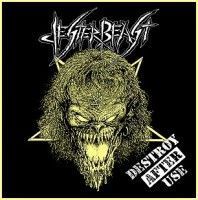 Jester Beast
Destroy After Use

A THRASHCORE CULT BACK TO LIGHT!! official top quality re-issue of JB's devastating Demo 1988 remastered from the original studio reels with direct control of the original band members. Merciless fast italian Thrash-core combining the fury of '80s Slayer with killer Voivod-esque riffing and the ferocious HC speed of Wehrmacht, SOD and DRI. A band that gained a legendary status in Torino's 80s underground scene seeing members like Tax (Negazione) pass through the ranks and touring with Morbid Angel, The Accused, Cro-Mags, Dismember and tons more. If you like the impact of the best riff oriented Thrash mixed with 80s Hardcore Crossover fury, this is THE record that you won't stop listening for years! Includes an insert with the band's history and tons of unreleased photos. Limited to 400 copies, no repress!!!

Kinski
Down Below It's Chaos (2xlp)