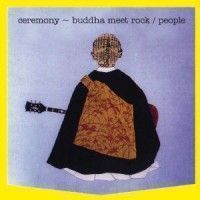 In a very real sense, Ceremony: Buddha Meet Rock is a knockoff album, a producer's attempt to cash in on a trend. But it's also an undisputed classic of the Japanese psychedelic underground. Given that a major locus for the said underground was the tumultuous, never-staged Japanese production of the musical Hair, maybe this shouldn't be that surprising. Credited to "People," the disc was organized by Hideki Sakamoto, Teichiku Records' A&R director, in an attempt to create a fresh version of what Polydor chief Ikuzo Orita had done on his so-called super-session LPs under band names like Foodbrain and Love Live Life + One. Creating a vague concept for the LP - Buddhism! - Sakamoto enlisted Orita's house guitarist, Kimio Mizutani, arranger Yusuke Hoguchi, and poet Naoki Tachikawa. For a super-session LP, though, and especially one featuring Mizutani, there is precious little shredding. Instead, the album focuses on gentle, droning jams. On "Prayer, Pt. 1," Mizutani's acoustic fingerpicking propels wordless harmonies, sounding more like freak folk than freak-out - at least until "Prayer, Pt. 2," though, when Mizutani kicks out the jams while women moan orgasmically. For the disc's epilogue, Sakamoto semi-accidentally became arguably the first of many producers to sample jazz-funk arranger David Axelrod, though more out of necessity than invention. Reportedly, the project went over budget, and was completed by adding bird sounds and a few fresh layers of jams to Axelrod's 1968 recording "Holy Thursday." Like the album's broader knockoffery, it works astonishingly well.

Eve
Take It And Smile