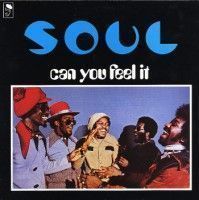 In 1971-1972, a handful of long-haired brothers representing Sounds of Unity and Love asked the world two simple questions: "What Is IT?" and "Can You Feel IT?" Miles Davis provided the perfect answer in his autobiography, which begins with an authoritative command to "LISTEN!" Duke Ellington had a deep understanding of what IT is, insisting that "IT Don't Mean A Thing, If IT Ain't Got That Swing." And James Brown let everybody feel IT when he proclaimed, "Say IT Louder, I'm Black And I'm Proud." While IT may have also been the sinister brain in Madeline L'Engle's science-fiction masterpiece, A Wrinkle In Time, in the hands of S.O.U.L., IT was just that.And if, by some sad miracle, you still can't feel what IT is after listening to these two S.O.U.L.. offerings, then you should turn for help to psychologist Carl Jung's classic, Modern Man In Search Of A Soul. For the lyrics of S.O.U.L..'s self-titled song tell it like it is, when bassist and vocalist Lee Lovett belts out, "You can't fake it / If you want to make it/ You gotta have soul / S-O-U-L, what's that spell!" This song is basically a musical re-enactment of the scene from the Blues Brothers, when Belushi and Aykroyd suddenly feel the spirit in the ecstatic black gospel church of Reverend James Brown. In many ways the spirit of James Brown presides over the funky grooves of S.O.U.L..'s first album, 1971_s What Is It? Although short in length, this album is a heavy, soul-drenched, seven course feast of raw funk power, guaranteed to blow your mind without expanding your waistline. In Europe, where S.O.U.L.. enjoys a major cult following, the jazz-funk instrumental "Burning Spear" remains in heavy rotation on the radio and in the clubs. Featuring a heart-stopping drum and flute break, "Burning Spear" is the band's go for broke stab at CTI-style early '70s fusion. While he may not have the chops of a first-rate player, flautist Gus Hawkins reveals on "Burning Spear" that he's certainly got the feeling. And that, in a nutshell, is what makes the music of S.O.U.L.. so rewarding.These guys were not brilliant songwriters or musicians, but on those counts they didn't seem to care. They had a contagious energy that couldn't be stopped, and they clearly enjoyed expressing themselves through music. While they never scored a major hit-single, their soulful impulses were always crowd-pleasing. In 1970, they won a battle of the bands contest sponsored by the May Company department store in Cleveland, Ohio, along with local radio station WHK and Musicor Records. This feat garnered them $1,000 and a recording contract with Musicor. The band went into the studio and recorded What Is It?, which surprisingly entered Billboard's Top 40 on the Soul Album chart. Four of the album's seven tracks are covers, ranging from Charles Wright & The Watts 103rd Street Rhythm Band's "Express Yourself" to Herbie Mann's "Memphis Underground. "Never sounding too derivative, the selection of songs is varied enough to highlight the band's versatility. On their second album, Can You Feel It?, the sound is a lot more refined, but never slickly polished. Covers give way to outstanding originals. S.O.U.L.. had matured as a band, and yes, you can feel it. Newcomer Bernard (Beloyd) Taylor's electric guitar moves forward in the mix, growling fluidly with a tone and style similar to that of Funkadelic's Eddie Hazel. The vocal harmonies and arrangements take inspiration from the later sounds of the Temptations and Spinners. The songwriting is strong and thoughtful, particularly on such message-heavy tracks as "Do What Ever You Want To Do" "Peace Of Mind," and "Love, Peace And Power. "The album kicks off strong with the inspired title track and nicely wraps itself up with the lush flute instrumental, "Sleeping Beauty." All in all, this is a more finely crafted album, showcasing the band at the height of their soul powers. More successful than What Is It?, the album remained on the soul charts for five months. After that, S.O.U.L.. released a few more records before finally splitting up. As is the case for much of America's greatest music, S.O.U.L.. continues to be neglected domestically while its following grows ever stronger overseas. I call on my fellow Americans to do the right thing-get IT!