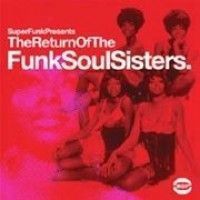 Female funk galore - and one of the greatest all-girl compilations we've ever heard! The set's a brilliant follow-up to the first Funk Soul Sisters set on BGP - but we've gotta say that we like it even better than the first, and really appreciate the wide range of unusual tunes collected on the set! There's a depth here that goes way past the obvious - a love of bad-rapping funky female soul that digs deeper, and comes up with some key gems that explode cliches and really expand our love of the music. Titles include both rare album and single tracks pulled from a variety of American indies of the late 60s and early 70s - and although many are by familiar artists, they offer up a side of their talents you really wouldn't expect! Titles include "Easily Persuaded" by Martha & The Vandellas, "Family Tree" by Little Rose Little, "Who Told You" by Jackie Moore, "That's How I Feel" by The Sisters Of Righteous, "Ain't No Love Lost" by Patti Jo, "Love Connection" by Annette Snell, "Gotta Get Away" by Harolyn Montgomery, "Just A Mistake" by The Ebonettes, "Do You Really Want To Rescue Me (part 1)" by Elsie Mae, "It's My Thing" by Betty Moorer, "Speed Ticket" by Inez & Charlie Foxx, "Get On Up & Do It Baby" by Marie Adams, and "Jesse Joe" by Jean Knight.

Various
The Afrosound Of Colombia Vol.1