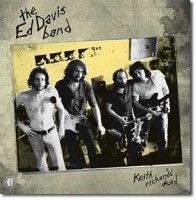 Guitarists Mike Enright and Byron Stevens met drummer Curt Gary at the University of Cincinnati in the early 70s. By 1975 they were jamming together, abusing controlled substances, and listening closely to Lee Perry, Pere Ubu, and the singles coming out of New York and London. A visit to a Bloomington, Indiana, basement to see MX-80 Sound was pivotal, as were debut LPs from The Ramones and The Patti Smith Group.In the winter of 1976, local guerilla art collective We're Just Like You put on a show at the university and needed a band. With the addition of Mikes high-school friend Bob Cotter on bass and a few weeks of rehearsals, Mike, Curt, and Byron formed Ed Davis, a name chosen because it meant nothing and revealed nothing. The group stayed together after the show and slowly built a following in Cincinnati clubs, eventually playing a series of legendary parties in their downtown loft.In '78 the band cut a single, played on WAIF-FM, opened for The Patti Smith Group at Bogart's, and lost guitarist Byron, who moved to NYC. Ed soldiered on for another year with new vocalist and pianist Fran Slater; bassist Bob switched to guitar; and Mike picked up the bass. Their last show, at the 5th Street loft backed by the Shake It labels legendary The Customs, was in June of 1979.

Livids
Your House Or The Courthouse