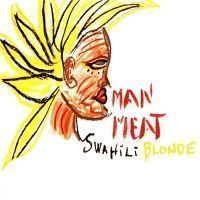 Swahili Blonde are are new band from LA California, they feature ex Red Hot Chili Pepper guitarist John Frusciante in their line up. There is also a guest appearance from John Taylor of Duran Duran playing bass on the track "Tigress Ritual". Swahili Blonde began with Nicole Turley (ex-WEAVE! drummer & vocalist) sitting in a little room amidst a bunch of instruments and recording equipment she didnt know how to use. After many long nights, she still didnt completely understand how everything worked, but was happy with the unconventional sounds and compositions she was able to make. She ended up being so happy with the result of her efforts, that she decided to record and release a collection of songs for a full length album, humorously called Man Meat.