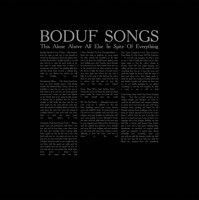 Boduf Songs is the name taken by Mat Sweet, who lives in Southampton England. Sweet has released a number of limited edition CD-Rs by himself and friends working in various combinations and playing music that ranged from pure electronics to heavy rock on his Bluebaby Recordings label. Boduf Songs was Sweet's first attempt at recording himself playing his own songs. The album was recorded with an acoustic guitar, some cymbals, violin bow, toy piano, manipulated field recordings and a computer. This will be his fourth album for Kranky.

Gates, Rebecca & The Consortium
The Float

Parks, Tess
And Those Who Were Seen Dancing