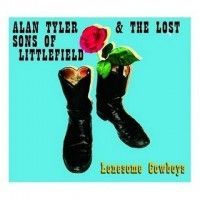 Country music from merry olde England? I wouldn't have thought so myself. Enter Alan Tyler, frontman of 90s country outfit The Rockingbirds. Having made his name with the Camden alt-country outfit, he is once again "looking for the country in the city", this time with his band, the Lost Sons of Dangerfield.The tone of the album is established nicely on "Rambling Girl". Apologies if this review spoils anyone's belief that Tyler is anything but English, for it'd be easy to assume that he is Tennessee born and bred.Tyler sings in an untainted country inflection. Whilst never being as thorough as the voices of his heroes, his voice is suitably country and rings well over the music. On "The Man That I Am", the signs of Tyler succeeding in making accessible country music (as was his intention) are clear. Simplicity and honesty make "Something You Haven't Told Me" what it is. Country music is deep-rooted in these virtues, and Tyler is more than adept at implementing them in his music. The painfully-titled "Cowboys Don't Cry" is, however, one of the low points of the album. Until this point Tyler had done well to deliver sincere country music while avoiding needless clichés. It can't be easy to be innovative in country music, but surely Tyler has seen enough John Wayne films to avoid a song like this. "Feel Better" is a return to the simplistic values that make this album as enjoyable as it is and "O'er the Hill and Far Away" brings the album to a fitting end.Country purists may dislike Tyler's city upbringing but when his music is so simplistic in its arrangement and lyrics, it's hard to forge any reasonable dislike for the music. "Lonesome Cowboys" is a decent offering from a man who takes foreign influences and applies it to everyday life. Ride on, cowboy.

Watzloves
Catch Me A Possum