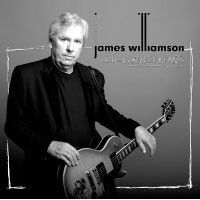 Williamson co-wrote all the songs (with Iggy) and played all the guitar parts for The Stooges 1973 album Raw Power. He played louder and raunchier than almost anybody at the time, with a jagged high-energy approach. For this, along with his creative song writing, many people consider him one of punk's pioneers influencing a legion of subsequent hard rock/punk players, including Steve Jones (Sex Pistols), Kim Thayil (Soundgarden), Johnny Ramone (the Ramones), Greg Ginn (Black Flag), and Slash (Guns N' Roses), among countless others. Backed by San Jose based roots rock band Careless Hearts James played his first gig in 35 years at the Blank Club in San Jose, CA on September 5, 2009. Includes tracks that have never been played live before such as No Sense of Crime and Night Theme alongside classic Stooges tracks. James Williamson is returning to the stage with Iggy & The Stooges in 2010 (rehearsals began in 2009) for shows in London next May.