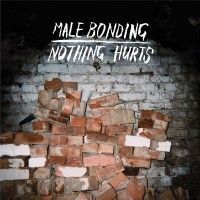 "Nothing Hurts" is the Sub Pop debut and first full-length for Dalston-based trio MALE BONDING. The album was recorded in the fall of 2009 in New York and was mixed and mastered by Pete Lyman at Infrasonic Sound. Made up of Robin Silas Christian (drums), John Arthur Webb (guitar & vocals) and Kevin Hendrick (bass and vocals), and rising from a flourishing DIY scene in their adopted hometown of Dalston, London, Male Bonding became a very real thing in May, 2008, with their first show, at an insane house party called "RAGE!" Male Bonding was born raging and it's been non-stop ever since. That party evolved in to a split 7" release with PENS on Male Bonding's own label Paradise Vendors Inc. (which sold out in a week). To date, Male Bonding has dispatched seven releases including a Flipper tribute 7" (on Domino Records) alongside PPM Allstars, Lovvers and Ponytail. The band has toured the UK with Brooklyn's VIVIAN GIRLS and played shows with LOVVERS, HEALTH, FUCKED UP, GRAFFITI ISLAND, MIKA MIKO, THESE ARE POWERS, NISENNENMONDAI, MAGIK MARKERS, and FINALLY PUNK among others.LP comes with a coupon code for free MP3 downloads of the entire album.