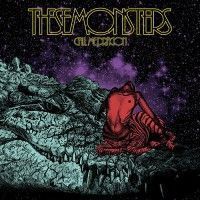 These Monsters
Call Me Dragon

Web links: www.myspace.com/thesemonsters These Monsters are Sam Pryor (guitar/vocals), Tommy Davidson (drums/artwork), Ian Thirkill (bass) and Jonny Farrell (saxophone/synth). Over the past three years the band have played an integral role in the Leeds experimental rock scene, working closely with bands such as Grammatics, Pulled Apart By Horses, Humanfly, That Fucking Tank, Chickenhawk, Dinosaur Pile-Up, Bilge Pump and Castrovalva. Call Me Dragon is the bands debut album, soon to be released with Brew (CD) and Function Records (Vinyl) . Having sold out of 500 CD singles and 500 12"EPs the band returned to the studio to put together an album that is as stunning as it is ambitious. Recorded at Foel Studios, Wales with Chris Fielding (Electric Wizard, The Klaxons, Napalm Death) and mastered at Turan Audio (Jimmy Eat World, Marilyn Manson, Will Haven). Call Me Dragon demonstrates the freaked out, riff driven prog-force that the respected four-piece have become. With their love of large vintage amplifiers, big drums and high energy, passionate performances, These Monsters deliver a huge live sound and are developing a reputation as one of the loudest and most exciting underground bands in the UK. So far These Monsters have impressed whilst supporting bands such as Russian Circles, These Arms Are Snakes, Oceansize, 65 Days of Static, Grammatics, Jeniferever, Dinosaur Pile-Up, Pulled Apart by Horses, Mono, Envy, We Vs Death, Health, The Whip, Foals, Lite, Unsane, Youthmovies, ilikeTrains, Broken Records and The Fall.