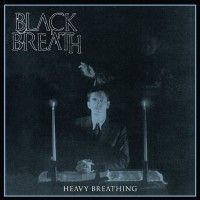 Southern Lord is beaming with pride as we present you with the debut full length from Seattles' most brutal new band: Black Breath. They are the bastard sons of Motorhead, Autopsy and Discharge on a filth kick of old school punk metal violence! Black Breath recorded this slab of audio terrorism wih Kurt Ballou (Converge, Trap Them, Disfear) at God City studios in Salem, Massachusetts. The end result of those monumental sessions is a recording much darker, heavier and more brutal than anything they have done before. The direction of the album contains many of the punk and hardcore influences that were exhibited on the Razor To Oblivion EP (released on cd late last year on Southern Lord). However, after listening to just five seconds of the albums opening track: Black Sin (Spit On The Cross) its painfully obvious the band has let their Swedish death metal obsession take control! Not since the mid-eighties when bands like Motorhead, Metallica and Poison Idea were giving metal heads bangovers has brutality been so infectious.

Beyond Mortal Dreams
From Hell