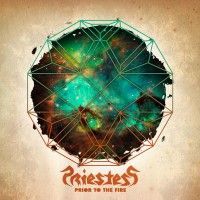 After much industry ballyhoo garnered from their intense live set, Priestess signed a deal in 2004 and released what is widely regarded as one of Canadas greatest hard rock debuts ever, Hello Master. Unlike most hard rock/metal bands that rely solely on ballast and blast to sear their message into gray matter, Priestess had a special trick up their sleeve - they could write a song that could walk the rope between being infectious and downright vicious. Armed with far more hooks than your average metal band, their unique style of driven melody with metal muscle and Marshall stack attack quickly earned them a die-hard fan base weary of death metal grunts and metal cliches. Their incessant touring included playing with such heavy hitters as Black Label Society, Mastodon, Converge and Motorhead , equally comfortable sharing a stage with Iron Maiden as they were with Di-nosaur Jr. 2007 was a watershed year for the band with even more touring , including a support slot in the UK with Megadeth and reaching more people when their songs "Lay Down" was featured in Guitar Hero III : Legends Of Rock. The band spent Autumn 2008 in Los Angeles under the watchful eye of pro-ducer David Schiffman (System Of A Down, Mars Volta, Nine Inch Nails), recording their crowning achievement, Prior To The Fire. If their calling card Hello Master was considered lethal, this sophomore effort easily trumps it with a devastating display of heaving heaviosity and a new found sense of inno-vation, on every track the band remains hungry, fierce and focussed and let their progressive rock and hard psych tendencies add to the dynamics. Double LP includes bonus 7" single and digital download card